This is a follow-up from Loghan’s Story Part 8: Can You Hear Me Now? When I left you in Part 8, Loghan had just had her second Auditory Brainstem Response (ABR) Test. The first one was when she was a few weeks old and the second one was a couple weeks after her first birthday.

Loghan passed in both ears the first time around, but the second time around she failed both ears and had to go under general anesthesia for the ABR because she was having an MRI the same day. The results from the ABR revealed that she had minor sensorineural hearing loss in both ears – the left being slightly worse than the right. Sensorineural hearing loss is almost always permanent and in Loghan’s case is a result that stems from RERE Syndrome.

With Loghan’s hearing loss being mild, there were mixed reviews from audiologists whether she would benefit from having hearing aids. I immediately wanted to get them for her but the feelings were also mixed at our house. It also didn’t help that insurance doesn’t cover hearing aids and Medicaid also did not cover them because her hearing was not “bad enough”. I could go on and on about how I feel insurance is a joke, but I will refrain and stay on track.

Long story short, one thing everyone could agree on is that Loghan needed a follow-up hearing test in another 6 months to ensure her hearing loss is not progressive. In the time between that hearing test and this one, we continued to work with her on speech as did the speech therapist through the Birth to Three program (B-3). Although her speech has not progressed much in between hearing tests, neither my husband nor I thought her hearing had gotten any worse so we were hopeful going into this one that, that would prove to be the case.

February 10th, 2020 we headed to the castle for Loghan’s follow-up ABR. In usual Nagel fashion, we were early so we had some time to hang out before we got our room assignment. I definitely think Loghan is a morning girl like her mama, unlike her Daddy, but he did a good job entertaining her even though he wasn’t quite awake yet!

Once we got to the room it was time for more entertainment and interviews with the nurse and anesthesiologist. Since the ABR was the only thing Loghan needed to be sedated for this time, we were able to do the less invasive, up the nose anesthetic. This is WAY easier on everyone involved and less risky too. They simply squirt the “night-night” juice up each nostril and 15 minutes later, she was out like a light!

Once she was asleep for a few minutes, they called in the audiologist to start administering the test. If there are not any hearing issues, the test should only last a half hour, however, we knew this would not be the case for us. The test was around one and half hours, then another half hour or so for a couple other tests and hearing aid molds.

The ABR can be somewhat intimidating with everything they hook up and all the wires, so here is a rundown of what you will be looking at. There will be electrodes put on your child’s head. The electrodes are stuck to the skin and connected to a computer and will record brain wave activity in response to sounds that are played through the earphones. The person doing the test will see the results on a computer as your child sleeps that you can get a printout of when everything is said and done. If you are like me, you also ask a million questions while the test is going on because you need to know everything!

To test the inner ear, they will place a different headset behind one ear and in front of the opposite ear. Then it vibrates the bones in the middle ear and sends those sounds to your inner ear. I believe this is the test that told us Loghan’s hearing loss is sensorineural.

The next test is an eardrum test, where the audiologist will used a place an instrument called a tympanometer. The soft plug that goes into the ear will detect eardrum movement and the movement will be shown as a bunch of lines on the screen. The lines tell the audiologist how the eardrum reacted. Ask them to show you how it looked and what it means.

We’re almost done. Since it was recommended, after reviewing Loghan’s results, that she should get hearing aids, they need to make the molds. This was really cool to watch actually. They carefully place a soft foam piece with a string attached gently against the eardrum. Then, they inject the goop, as I call it, with a giant syringe and wait for it to try. After that, they softly pull out the mold, check the ear to make sure nothing is left over and plop them in a bag to get sent off for the mold. The last thing we had to do was choose colors. If you know me, then you know I chose purple!

All right, now that you have all that figured out – let’s wake sleeping beauty up. This is my favorite part. She has already been out for a couple hours so I just nuzzle right up to her and give her kisses all over until she wakes up and is like, “What the heck Ma! Knock it off!” She is so groggy and looks like grandpa when he’s had a few too many drinks on the weekend! She’s just so snuggly and you can guarantee that’s what we did the rest of the day. This was mainly because the medicine was still wearing off, but I wasn’t going to complain.

Now we patiently wait for the hearing aids to come in! 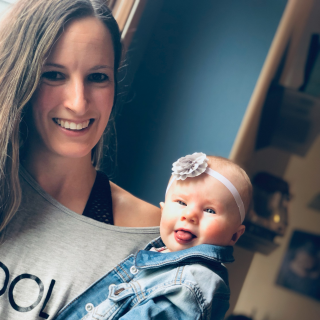